The Joys of Miniatures

It's been months since I transitioned into color and as I expected the work has become more complex but so much more fun! I don't regret it, so thanks to all you B&W naysayers.

Recently I've had to step up the work on the miniatures in order to finish and shoot the rooms of the house. So far only Lars' room is done. The others are in varying degrees of completion.
In attending to the fine details I've had to replicate to scale a few objects that appeared in the action shots. Lars' Encyclopedia Britannica for instance, which plays a huge role in the way he recreates civilization in his mind.

Here it is in an early scene: 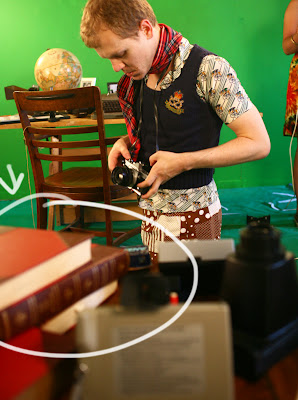 I reduced and printed the covers: 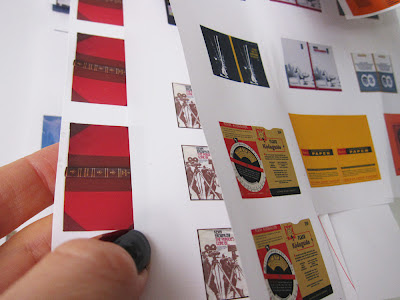 And made the tiny replica's: 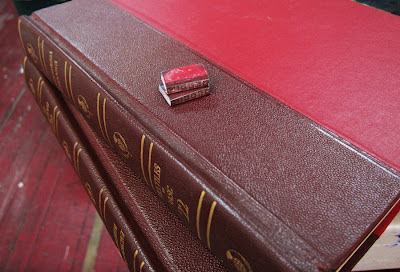 And here they are inside their tiny shelves: 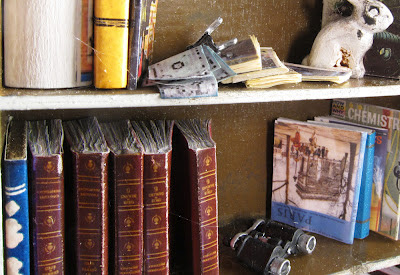 A similar process was applied to other books and while at it, I threw in some food packaging needed for the kitchen: 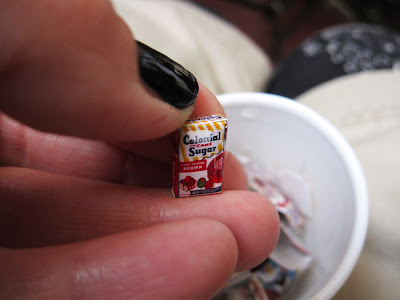 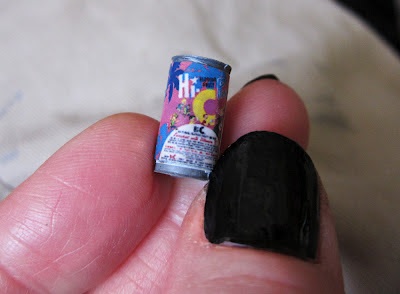 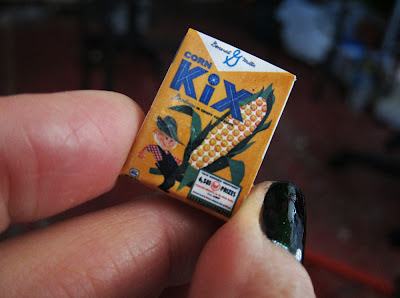 I was lucky to come by Jason Liebig, an avid collector of vintage pop culture, who was a great sport and gave me carte blanche to use any of his hi res images for the project. This actor/writer has a soft spot for comics it appears, as he has worked for Marvel as story and Art editor for the X-MEN line. You can see his dazzling collection here.

On board with me for the tedious job of assembling these items was my friend Mindy Florestan.
Here she is during one of our many sessions assembling a Coca-Cola crate. 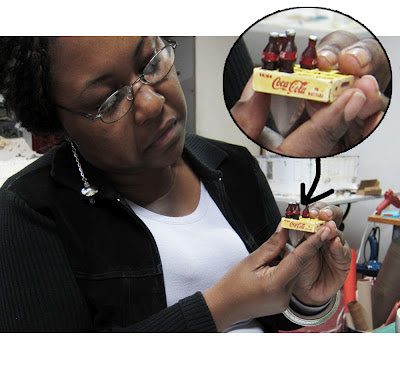 Another convoluted process was making the miniature photographs that Lars' had shot and particularly his experiments with photograms. I shot some pertinent items from the production (Such as Lil's stylish sunglasses and medicine bottles) over a light box to achieve the high contrast. Then reduced and printed the shots on shiny paper. The final step was to age the paper with a solution of turmeric in water: 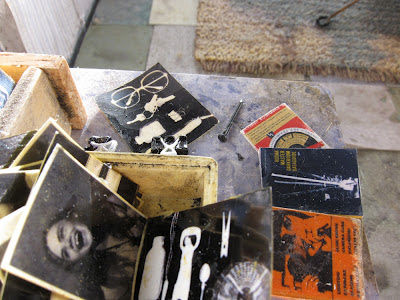 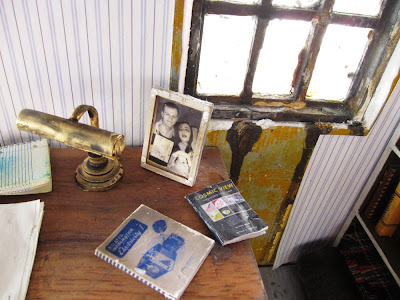 (The books on Lars' tables are Cosmic View by Kees Boeke, 1957  and a car electricity manual by Delmar Publications).

Here's Nanna's sewing box. Found it online, painted it and filled it with tiny stuff. Fun! 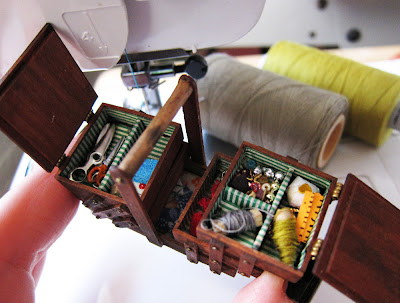 The chandelier was a tough one. After a year on e-bay and other sites, I gave up on finding a miniature period chandelier and ended up having to make my own out of beads and metal. 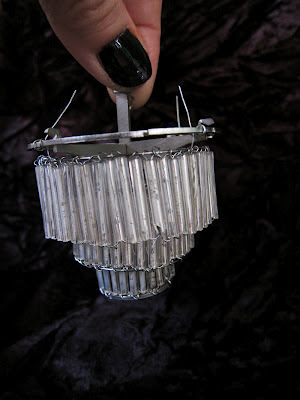 Below is a quick evolution of Lars' room up until the first tests combining the action and miniatures. Looks like it's going to work out fine. Huge sigh of relief. 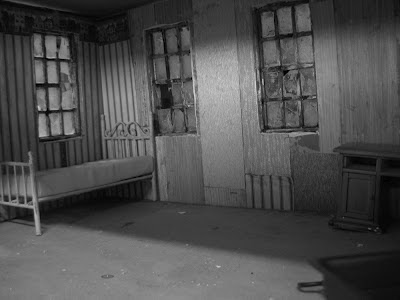 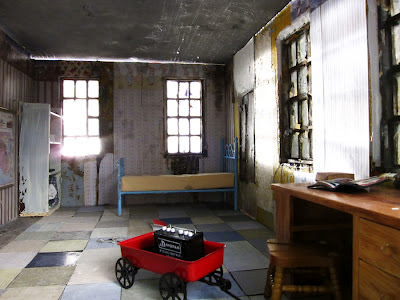 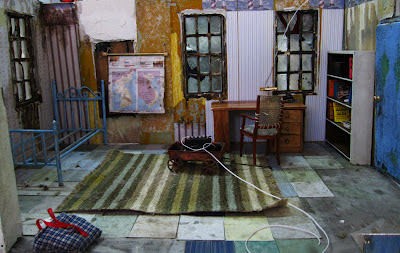 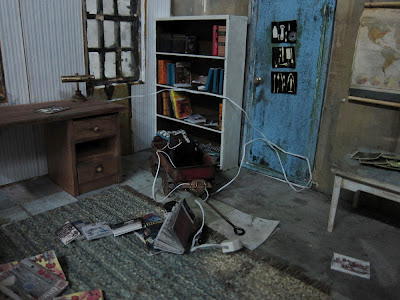 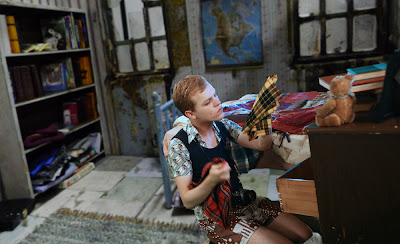 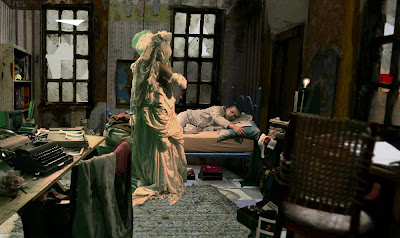 For the aerial views of the entire island I intented to rely on stock photography, but again, believe it or not, after a year of searching could not find a decent sequence of photos of an aerial approach to an island. I even considered buying a video and extracting a series of stills, but the resolution was too low and the islands always the wrong kind of island.
So below is the "quickie" mini diorama I made in a few short days: 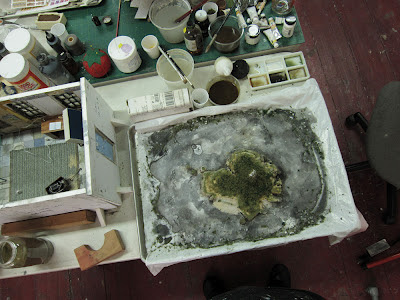 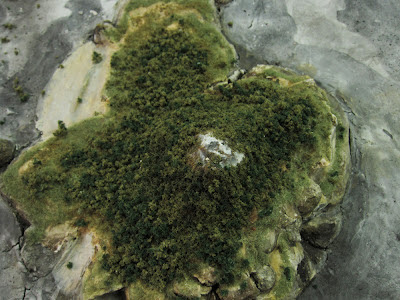 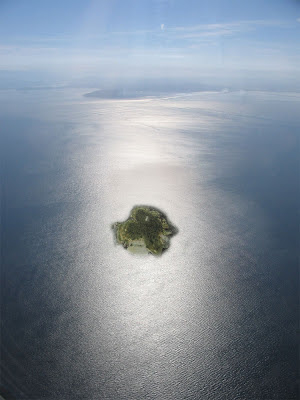 The big diorama is all finished and done and I shoot it almost every week for one scene or another. All this photography gets done at night to avoid mixing with real day light.
It's a task out of my field of expertise, but then again, so is this whole project! 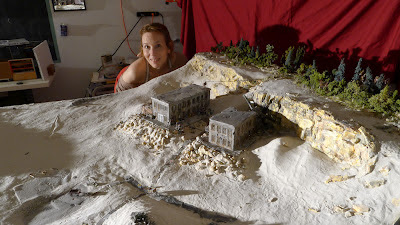