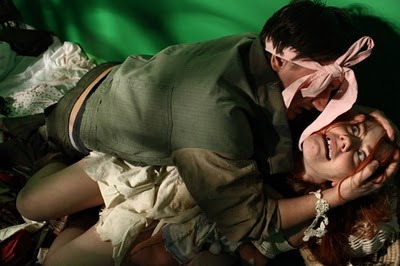 Strange beings inhabit a studio on the Northside in Williamsburg. Here are some of them: incredibly crafted rodents and fowl (thanks to special effects artist/prop maker Hiroe Goto); a taxidermized ferret oozing synthetic entrails; a lion of a man with an oversized ball sack; a voluptuous woman preparing dinner as her hair blows in a whirlwind of domestic ecstasy; a dying soldier and a young girl who has taken him in as her doll as she delves into an imaginative escape from reality; a boy who flutters around like a baby bird; a teenager on the brink of womanhood exploring sexuality with a younger brother, teddy bears, and Playboy; rotting food and a home brewery.

What’s all this? It’s what Stavit Allweis sees as some of the components of what will become the pages of an epic book of sequential art. Visual artist turned director Allweis’ “set” looks Felliniesque, with its frenzy of activity: costumes are being designed, sewn and embellished; miniature sets are being constructed; and Allweis is planning the next weekly shoots. Over the course of the last months, she has been using green screen, a technique for compositing two images. This, along with the props which date back to the 1970s, inspires her in this unusual project.